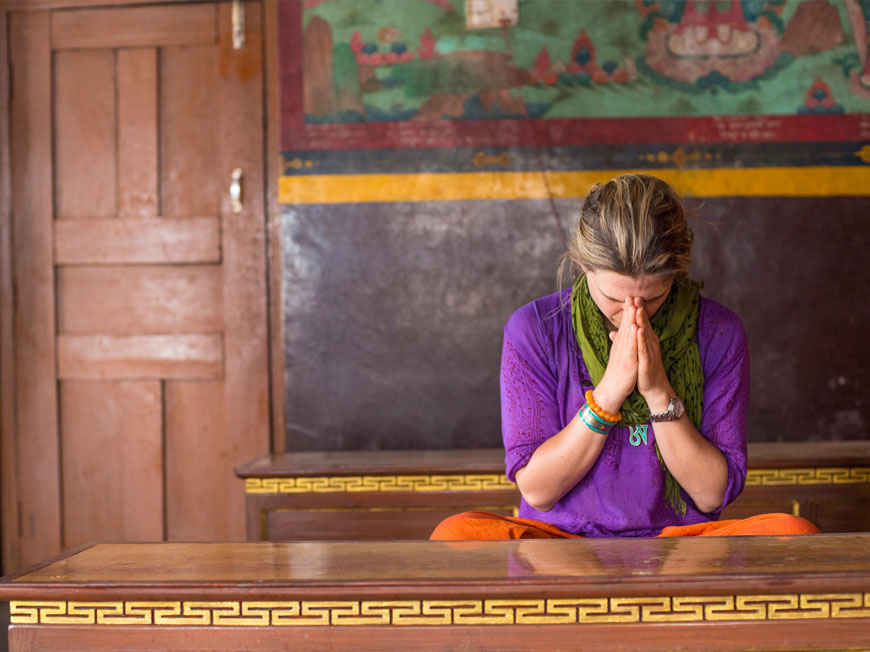 Writing on the Wall

It started with a post-it note. Pro-snowboarder Halina Boyd was at her Teton Village home contemplating her next move. She mapped out her goals and ideas on a series of post-it notes. Pasted to her wall, the little neon squares read “Snowboard in Nepal”; “Empower people” and “Create a film whose story could empower people.”

“This whole idea has been evolving my entire life,” Boyd said. “I’ve always had this affinity for mountains. Snowboarding has become my favorite way of being a part of them.”

Still, her post-it notes posited separate goals for different times. She did not expect to fulfill them all at once. But soon, she will. In the spring Boyd and her crew, which includes Jackson director Noah Waldron, will head to Nepal to film Bātō, slated to debut in late 2018.

Bātō is the Nepali word for “women’s path,” but there are multiple trajectories at play here. The first is that of the female Nepali mountain guides who will guide Boyd through the Annapurna Sanctuary and Langtang region of the Himalaya. Her guides are employed by Three Sisters Adventure Trekking, among the first generation of professional female mountain guides in Nepal. They, perhaps more than Boyd, are the heart of this story.

“We wanted to convey a larger humanitarian message,” Boyd said. “Some sort of social impact through this storytelling.” When Boyd landed at Three Sisters’s basecamp in April 2016 she knew she had found the story.  Three Sisters was founded by, you guessed it, three sisters in 1994. Lucky, Dicky and Nicky Chhetri moved to Nepal from India in the early 1990s. Alongside their mountain guide training program and guide business, they also founded the NGO Empowering Women of Nepal (EWN). The goals of each are ultimately the same: to offer options to women who, historically, have had none.

Settled in Pokhara, the heart of Nepal’s adventure tourism, the Chhetri sisters noticed two phenomena: women often came to them with troubling stories of abuse or neglect at the hands of their male guides and Nepalese women who lived in the shadows of these breathtaking mountains had limited, if any, access to them. Mobility and autonomy for Nepalese women was, and often still is, out of reach.

“The women who would come, they had nothing,” Lucky told REI in October. “They had a big social disadvantage. Most of them come from a low caste. They have a broken family, they have no education and they have lots of fears. They didn’t trust themselves.”

Even if Three Sisters graduates do not pursue a career in mountain guiding, they leave with an education and proficiency in English, which will take them far in Nepal’s tourism-dominated economy. The hope, Boyd said, is that they leave knowing their strength, and their options.

“It is very hard for women to get out from home in Nepali society,” said Three Sisters guide-in-training Sistri Dharma in a Kickstarter campaign video. (The campaign did not reach its goal on October 27, but the project marches on.)

Dharma was one of two guides leading Boyd on her inaugural April trek. It was special, Boyd said, to see the two young guides mentoring and learning from each other. “She’s learning English, learning how to explain the route to us. It was so endearing.”

So that’s Bātō’s poignant humanitarian story: Nepalese women gaining independence and mountain prowess in the heart of the Himalaya. But it’s not the only component. Back to Boyd’s post-it wall: snowboarding in Nepal, she said, has been a goal of hers as long as she can remember. She grew up reading Jon Krakauer’s Into Thin Air and Frederick Lenz’s Surfing the Himalayas: A Spiritual Adventure.

“All those different levels of experiencing that area are so intriguing,” Boyd said. For her, snowboarding has always been more than the physical mechanics. Being in the mountains, she said, is a spiritual moment. “[Mountains] are great teachers and bestow infinite wisdom.”

It’s not insignificant that Boyd is a female athlete working alongside female mountain guides. Nepalese women face barriers that may feel foreign to women in the U.S., but professional female athletes around the world still struggle for equal footing. Social scientists largely agree on two things regarding women and snowboarding: it is still a relatively young sport, especially for women, and snowboarding is not immune to the ills that plague other professional sports cultures.

Mountain sports are still largely regarded as “masculine,” and mountains themselves as masculine spaces, explained sport sociologists Mark Stoddart and Jason Laurendeu. Women who excel in mountains, then, are seen as exceptional rather than normal. Female-centric media, like Boyd’s film, has the power to challenge that.

Boyd did consciously decide to invite one “token male” snowboarder to the team: Nick Russell. The question of whether to invite a man into this story about women was a heavy one, but Boyd decided his perspective was too important to exclude. After all, men play an important role in empowering women, whether women (and men) like it or not.

“This is a world we’re all living in together. If it’s just women talking to other women, it’s not as powerful as women and men coming together to tell this story.”

Boyd considers herself lucky. She grew up with two older brothers who pushed her to keep up. “I was never taught that women were any less,” she said. But that doesn’t mean the playing field is equal. Boyd’s own abilities do not prevent people from projecting their sexist viewpoints on her.

“There’s definitely this assumption of stigma in what you are capable of and not capable of,” Boyd said. “Recently, women in the U.S. have been breaking those molds. But I also think we have a long way to go as far as providing opportunities, providing those career paths.” And that, Boyd said, is what makes her work as a snowboarder so relevant to the work Nepalese women perform as mountain guides.

Boyd plans to bring an extra snowboard to teach her guides how to use it, and teach them basic avalanche safety. After all, female empowerment is a global goal, and mountains are a universal tool.

“The skills these women are learning will give them access to the mountains in an informed and educated way,” Boyd said. “From there, they can choose how they want to experience the mountains … there are many ways, but that love and drive that keeps us coming back is universal.”

Shannon Sollitt is a freelance writer from Jackson. She loves stories about snow and mountain living.