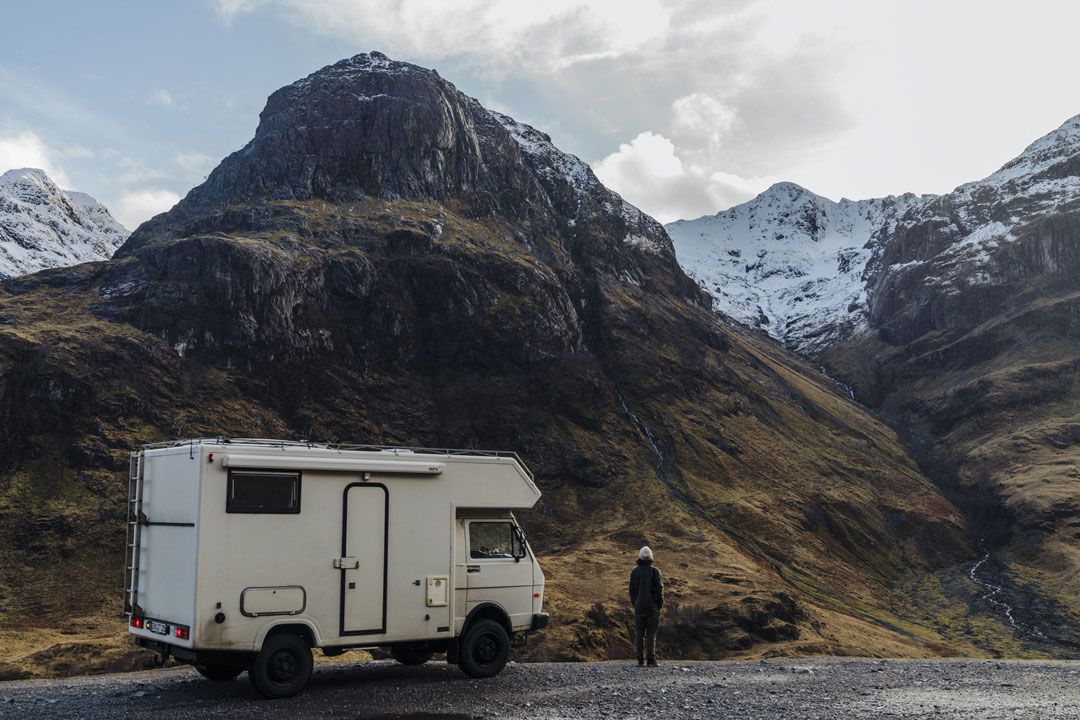 Lessons of stewardship, friendship and freedom from across the pond. Photo: Wade Dunstan

Lessons of stewardship, friendship and freedom from across the pond.

On screen, Scotland is alive and dank, as if moss will grow on anything that sits unmoving for even a moment. It is also impossibly ancient, resolute and impervious to human hands.

If the terrain is marked by progress, there is no evidence that it won’t just be casually swallowed up by time. Every material and method of man eventually rotting and returning to the dirt, every structure eroded, every grand idea made irrelevant by the next.

Scotland through the camera lens waits as old things do—passively, without resistance or judgement. It waits to be asked of the stories it holds. It will tell the story of how Earth, like its inhabitants, is just a series of connecting bodies that are dependent on each other to survive. It will tell a story like The Right To Roam.

In 2017, pro-snowboarders Marie-France Roy and Jackson’s own Alex Yoder teamed up with the local production crew WRKSHRT, Wade Dunstan and David Cleeland, for a Scottish exploratory mission. With the support of Patagonia, they set off to convene with the land and its people. Their tools were snowboards and the ability to forge friendships at every turn.

It was a fitting collaboration. WRKSHRT captures human and wild connections in a fresh and captivating way. Yoder and Roy, meanwhile, are mindful outdoor denizens. They all draw from the culture as much as the landscape or the agenda, treating the mission like a “choose your own adventure” book. Their endeavors are collaborative and unscripted, the fruits of their labor intimate and soulful, their lenses equally fixed on human connection and adventure.

This method set the vibe for what was, at its beginning, a free-form, loosely planned journey into Scotland with a few good friends, an adventure mobile and some cameras.

During the first days of the trip, Yoder and Roy met Scottish snowboarder Lauren MacCallum. Over a few pints in a local pub, she clued them in to the 2003 Land Reform Act. It grants everyone the right of access over land and inland water throughout Scotland for recreational and educational purposes.

History and culture are at play here, MacCallum said. “You can go really deep and far back into how land was divided between clans. Even back to Gaels and Picts, the Vikings and Irish. … A lot of people respect that you do have the right to roam, there is that notion that Scotland has no trespassing laws. I am free to do as I wish. And that is a nice sort of liberty to have.”

In that chance meeting at a random pub, MacCallum was woven into the story that would become The Right To Roam. The film quietly draws the parallels between our land and theirs, laying out the responsibilities of what is considered a right and the debt that is accrued by such uneven distributions of public resources.

Without nature we’re nothing and without us it’s still everything.

It is people like MacCallum that give this country an inviting, enduring warmth while the Scottish landscape is a harsh contrast. The snowfall of 2017, the bleakest in years, did little to soften the terrain. The snowboarding was less about action and more about drawing lines in the snow as a way to carve out its secrets. Yoder and Roy’s explorations of it are an act of creativity and making the most out of a little.

The hard won Land Reform Act is just one part of Scotland’s bone-deep love of the land. The Scots co-exist with the natural world with tenderness and gratitude. They don’t conquer it, they tend to it. People have a strong sense of pride in sharing their country with one another, the freedom to roam as well as the respect and stewardship toward their land is all just assumed, Dunstan told Jackson Hole Snowboarder Magazine. “They don’t know it any other way.”

To see such a place through this lens makes it impossible to deny the power of stewardship. Dunstan, a Wyomingite, was acutely aware of the disparity between this land and America’s land. “To understand a concept so basic as the freedom to wander wherever you like shouldn’t be difficult, but it’s simply something we don’t grow up accustomed to in the states because we don’t have that freedom.”

And therein lies the magic of such a simple story told by a small crew of free-spirited snowboarders. It poses questions that must be asked: What can we do when we are given the right to explore our lands without restriction? How can we hear the stories that our planet has to tell?

While the crew was in Scotland, the battle for Utah’s Bears Ears and Grand Staircase-Escalante national monuments had just begun. In August 2017, President Trump scaled back the size of these protected areas, paving the way for potential mineral development.

“We’re truly disillusioned about how scarce our protected land is in America and how quickly it’s shrinking under the new administration,” Yoder said. “What’s to lose carries far more weight than what’s to gain in this fight. I wish everyone would take a walk through nature more. Without nature we’re nothing and without us it’s still everything.”

Such a notion begs the question: Once we know these stories, deep in our bodies, how can we properly nurture this gift of being free to roam?