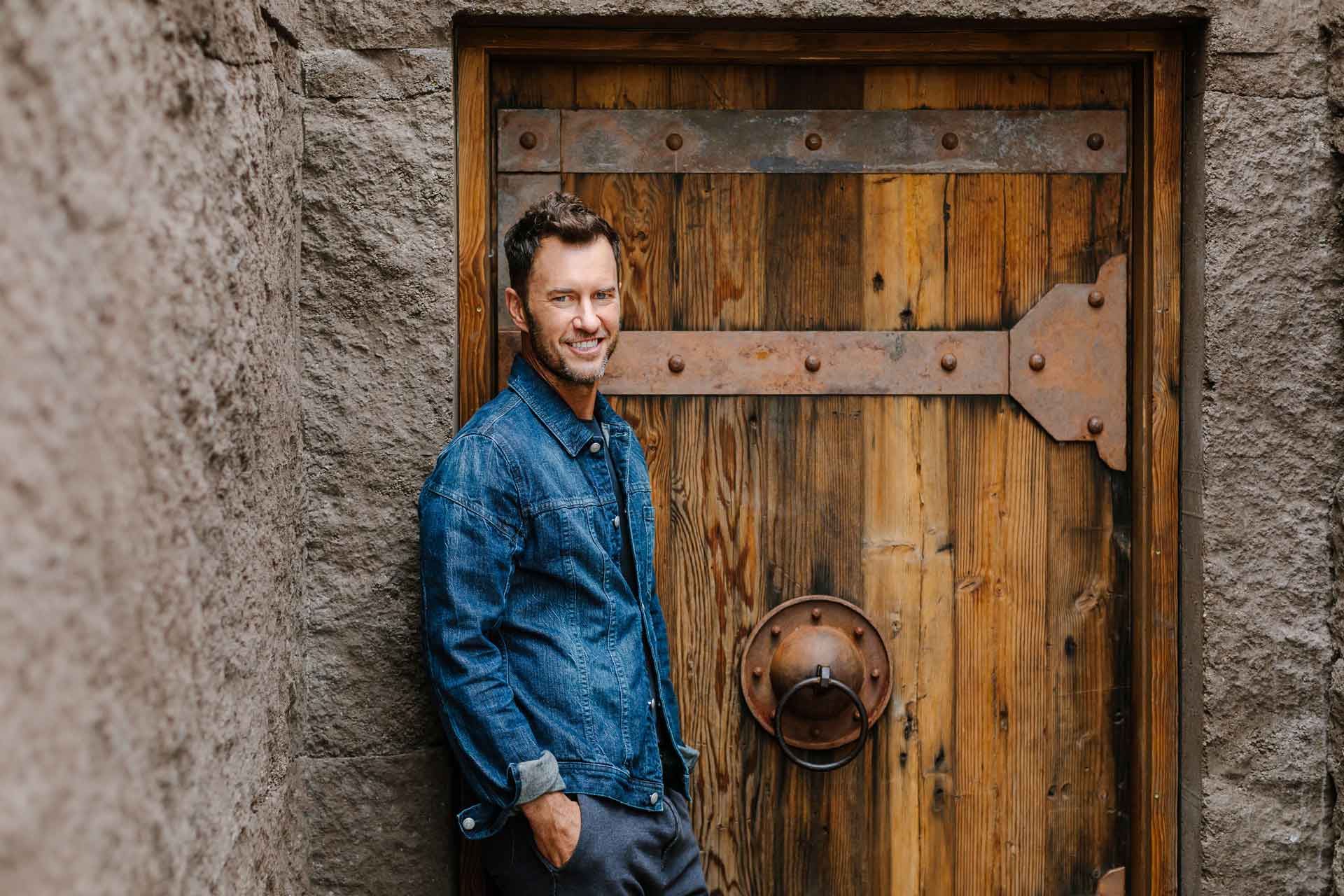 TOMS Shoes founder Blake Mycoskie is a conscious capitalist with a love for Jackson Hole powder.

The story of TOMS is the story of how one person can affect demonstrable change in his own backyard and beyond. Founder Blake Mycoskie has created a blueprint for business where people and the planet are prioritized alongside profit. For every pair of TOMS Shoes purchased, the Jackson resident gives a pair away. His “one-for-one” model has changed what it means to run a business in an age of extreme wealth and poverty. But Mycoskie is always evolving. TOMS is now also teaching folks “how to fish.” The company is carving sustainable paths for people in poverty and creating jobs in developing countries. Mycoskie also doesn’t shy away from difficult issues in his own backyard. That means standing up for contentious causes he believes in and pouring time and massive amounts of money into those efforts. Jackson Hole Snowboarder Magazine sat down with Mycoskie to discuss what it means to be a conscious capitalist and why he is willing to take a stand and risk alienating his customers in a deeply polarizing time.

Jackson Hole Snowboarder Magazine: What inspired you to launch TOMS?

Blake Mycoskie: It was 13 years ago. I was traveling in South America and saw many kids without shoes. At the same time, I stumbled upon this traditional shoe that the polo players wore on this farm near Buenos Aires. One morning I had this idea: these shoes are really great and I have never seen anything like this in the United States. My friends would like these. I wonder if I could sell these so I could give shoes to the many kids that I see here that don’t have them.

So I started, not even a business, just this little project called “The Shoes for Tomorrow Project.” And that’s where the name TOMS came from. It was Tomorrow’s Shoes but that was just too long for the tags. So we shortened it to TOMS. We called it TOMS Shoes for a Better Tomorrow. I made a couple hundred pairs with a buddy I met playing polo. That was the beginning. I had no idea, of course, what would happen after that. We just gave away our one hundred millionth pair of shoes. So it’s been a crazy journey.

JHSM: That defining moment traveling in Argentina set the tone for the type of global company TOMS has become. Beyond that experience, how has traveling informed the way you live and work?

Mycoskie: Well, it’s really affected me in so many ways. I do not see myself as an American or a Texan, where I grew up, or now a Wyoming resident, as much as an earthling and a human. You know, truly a resident of the world. And I think that’s because I traveled so much and met so many amazing people and experienced so many amazing cultures that I feel just how undeniably connected we all are.

One of the great blessings of travel and my experience with TOMS is to see just how beautifully people live with the simplest means. Many of the communities where we work in around the world have very little material wealth, but incredible relational wealth, and spirit. So it has helped me look at my own life and my relationships with my employees, my family, and friends and really try to help people in our country right here, in our own backyard, live in a way where they’re flourishing the same way I see in the smiles of people in Rwanda or Guatemala or Cambodia. And that’s been a big part of what is affecting a lot of the work that I’m doing now, is to try to help more and more people with their mental health and to have ways to be doing positive practices and habits so that we can be in a state of flourishing, like I see so often in places with very few resources.

JHSM: There’s a lot of thought and research that goes into the TOMS philanthropic work. And your strategy is evolving. You invented the “one-for-one” model, donating a pair of shoes for every shoe purchased. And it’s a model that has been exalted worldwide. But now you’re more closely studying how your business can improve lives beyond the one-for-one.

Mycoskie: One of the big things in the last six or seven years was really trying to figure out how we could use our supply chain to help create jobs in the countries that we work in. So today about 40% of our giving is in places like India, Ethiopia, Kenya. In the places where we are giving, we’re also now creating jobs. And that’s a big part of the mission of TOMS as we go on this broader journey of using our business to improve lives.

The other thing that we have done is really engaged in activism here in the United States on issues that we think matter to our customers and to ourselves. Last year, we made the largest corporate donation in the history of the United States to helping prevent and end the gun violence epidemic that we have here in the U.S. And we got 750,000 Americans to send postcards to their congressperson urging them to pass universal background checks.

Ultimately, universal background checks was passed in the U.S. House of Representatives. And now we are working hard along with many other amazing organizations to have the Senate take it up as well.

Ultimately, we’re trying to use TOMS as a method for activism and as a symbol for just giving a shit. When you wear a pair of TOMS, you’re really saying, I care and I amusing my life and my resources to support a company that wants to make a difference in the world.

JHSM: We live in a deeply polarizing time when it comes to our political climate. But you’re not afraid to take TOMS into that realm. That’s a bold move – a lot of business owners, entertainers, people who are trying to appeal to a broad segment of the population are hesitant to do that.

Mycoskie: Yeah, very much so. I found that after the work that we did on the gun violence stuff . I thought a lot of CEOs and even celebrities would join me very quickly. Th at ended up not being the case. And so that was very hard. You know, I can understand because people are often scared about alienating or polarizing part of their community or their customers. But at the same time, we have to stand up for what we really believe in. And that’s the most authentic expression of ourselves as people and as businesses. So it’s a hard thing. But I do believe more and more influential people and businesses are realizing that their customers are their fans, that they won’t have that relationship to them unless they are truly standing for what they believe in. And they might lose some people, but they’ll be much deeper with those who follow them and support them.

JHSM: There is a growing movement of people who point to capitalism as the root of so many problems. It’s been traced back to America’s slave-owning past and the ways in which this country still systematically oppresses people today. So as a conscious capitalist, how do you want to see capitalism evolve?

Mycoskie: Well, I think it has to evolve and it is evolving with companies like TOMS and many others, Patagonia being a great example as well. Patagonia is one we looked up to a lot when it comes to not just looking at profits, but looking at people and the planet too. I think a company can really focus on the three Ps in that regard. When doing that, we can use capitalism as a force for good and hopefully create a new model that more and more entrepreneurs will follow.

JHSM: You built TOMS around socially conscious themes, around doing good in the world. From that model, what could people in Jackson learn? In other words, what responsibility does Jackson, a hub of extreme wealth and privilege, have to address issues of inequality and poverty?

Mycoskie: Well, I think the first thing is looking just within our own community at the economic divide that exists, that is more and more pronounced every day in Jackson Hole. We need to make sure that we are doing what we can. Those who have wealth need to make the lives of those who do not have it so good as meaningful and as equitable as possible. And there’s some amazing organizations in Jackson. I just got introduced to One22 and I was very impressed with not just the work they’re doing to help the Latino community, but all of those who are having financial struggles. So really, thinking locally is super important. And then the second thing is a lot of people in Jackson don’t just have wealth, they also have influence. And I’ve found in my own philanthropy and what I do even outside of TOMS that lending your name to something and engaging your creativity is as important as your resources when it comes to positive change. I think that’s something that you can do from anywhere in the world.

JHSM: Jackson Hole’s long-term survival hinges on the vitality of the environment. That’s why some say this area should be at the forefront of tough conversations about climate change. How would you like to see businesses help solve this problem? What responsibility do they have?

Mycoskie: Well, I think the first response is doing something that we’re working on heavily at TOMS right now: just doing less harm. Patagonia talks about this in a really beautiful way—anything that we create, that is consumed, is creating some harm to our planet. We have to be realistic about that. And at the same time, we have to try to constantly be innovating so that less and less harm is done based on the materials that we use, the way that we source materials, the way that we transport things. It just goes on and on. So I think businesses have one of the greatest opportunities to work with their supply chains and their operations in a way that just creates less degradation to our environment. And to the point about capitalism and the challenges it has created in the world, there’s no doubt. But I also believe that being a conscious capitalist and really thinking about how businesses can also lead the way for individuals and communities to focus on things that can help address this problem is really important too.

JHSM: Now that we solved the world’s problems, tell me about the first time you snowboarded in Jackson Hole.

Mycoskie: (Laughs) Yes! It was several years ago. And like many people who come to Jackson, discovering how to easily access the side country was just such an incredible delight. I’ve done a little bit of backcountry split-boarding in Mt. Baker and some other places, but had not been able to access terrain like that so easily, like you can off the Tram. It’s such a special place. And I’m so grateful now to call it home. The first time I went out, I had an amazing day of powder and good friends and guides. It was the beginning of my love affair with the mountain and this community.

Robyn Vincent is the former editor @JHSnowboarder and has a propensity to let ‘er buck. @thenomadicheart 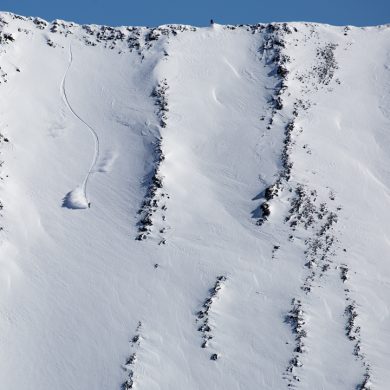