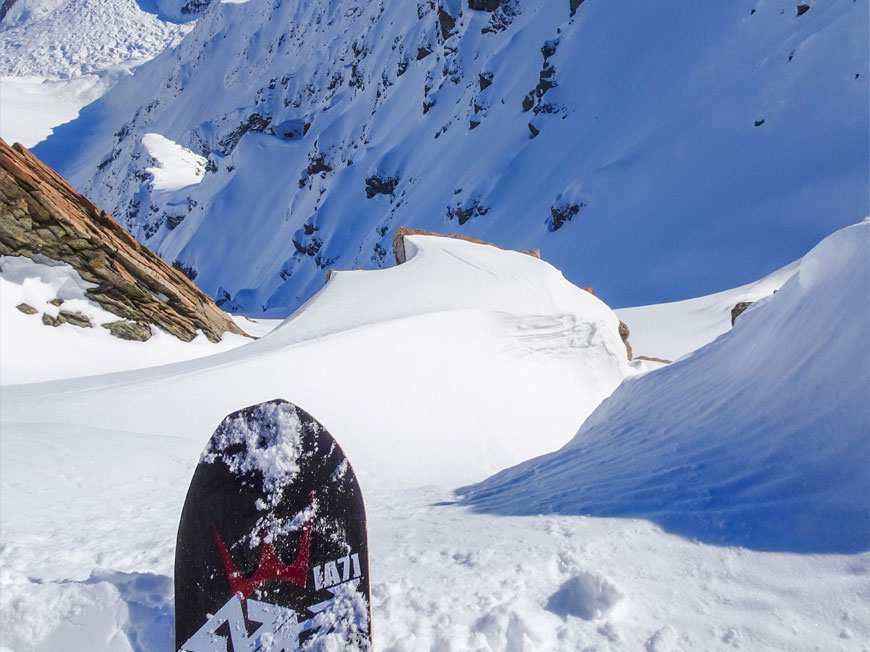 Riding the line between life and death in New Zealand

The indigenous Māori people of New Zealand believe the mountains are the link between the supernatural and natural worlds. For snowboarders, mountains are a place where we dance and play, connect with the spirit of nature, and ride that invisible line between the two worlds. But sometimes riding that line can get us a little too close to the other side, as I discovered one beautiful winter day last summer.

Flying in a helicopter through the mountains of New Zealand is a surreal experience. The mountains are craggy with Teton sensibilities—huge granite walls rise from the glacial plane below, ancient blue glaciers cascade out of the mountains and into the valleys, complex and beautiful in their slowly flowing forms. It is an awe-inspiring place to snowboard.

Seth Wescott and I traveled there to ride the fabled mountains of Aoraki/ Mt. Cook National Park and film with Warren Miller for L.L. Bean. We had lucked out with fresh snow and sunny days, a rarity in New Zealand. While our friends sat by the pool, we were chasing big lines down under. There is nothing like riding powder with one of your best friends in the middle of summer.

One day Seth and I found ourselves standing in the sun at the top of a pristine peak looking down at one of the most beautiful lines of the trip. The conditions were perfect, the sun was shining with two feet of new snow and there was no wind. I lost the rock-scissors-paper battle for who would drop in first and watched with jealously as Wescott rode down the steep couloir, carving huge arcs down the untracked snow, dodging towering spires of rock with fierce rapidity.

Then it was my turn. With a high five from the cinematographer filming at the top, I dropped in and began my descent, blasting perfect snow 20 feet into the air with every turn until I spotted a cliff to drop about halfway down.

“It was a beautiful sight, utterly mesmerizing, that moment when the avalanche sparkled to life underneath my feet.”

Wescott warned me on the radio that, after landing if I went too far down the slope I would fall off a large cliff or get raked through rocks made of giant dragon teeth. I rode up to the edge of the cliff and took a moment to center myself and mentally prepare. The line was doable, but I knew I had to land the cliff solidly or face the consequences. I also suspected there was a slight chance some of the new snow might slide on me, but that if I had enough speed I could make it to a safe spot.

The rider spirit in me could see the line and that gave me courage. I knew I could do it. After all, this is what I was born to do. With a “3-2-1 dropping,” I launched the cliff and rode like lightning out of the danger zone. But then it happened. It was a beautiful sight, utterly mesmerizing, that moment when the avalanche sparkled to life underneath my feet.

I had stomped the cliff and was initiating a toe-side turn toward safety when it erupted. I watched in wonder as pure kinetic energy shook from the snow. I was so distracted by the beautiful blue color of the shooting cracks across the slope that I almost forgot how much danger I was in. I was in awe of the power of the mountain.

“My Mom will kill me if I die in New Zealand!” my inner voice called out. Snapping back to my senses, I knew I had to keep charging to the right to make it off the slab and to a safer zone where the avalanche would not pull me off the cliff. I entered that timeless state where everything slows down and rocketed toward safety. Nearly to the edge of the slide, I caught a rock that stopped me cold in my tracks. It broke my board and sent me full tomahawk into the moving snow.

For a moment, all was quiet. I was in an underworld of white light and shadow as the snow cascaded over me. “Is this it?” I wondered. Fighting against the tide, I finally regained my feet and kept riding beyond the edge of the slide path to safety.

After taking a minute to pull myself together, I rode to the bottom to meet up with Wescott and observe the aftermath of the slide. A deposition pile 15-feet deep sat at the bottom of the slope.

The ancient Māori warriors—adept at fierce ambushes and stealthy escapes—had a chant they would recite before going into battle called the haka. You may have seen New Zealand’s famous rugby team, the All Blacks, performing it before games. Loosely translated the chant means, “I might die! I might die! I might live! I might live!” Drawn into deep reflection of how sacred life is, and how close I had come to losing it all, I was grateful to leave New Zealand still riding the line of the living.